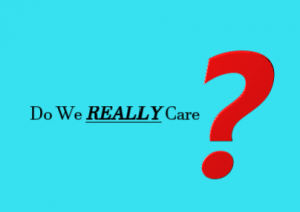 I wrote this short article for www.ecommerceconsulting.com, and also wanted to share it with you here as well. Hope you enjoy it.

Do we care what our customers think? What they REALLY want?

In this day and age, you would think that we would know more about our customers than we could even utilize. After all, consumers willingly allow companies to gain insight about themselves more than ever before (likely not even realizing how much information they are sharing).

For example, GPS enabled apps gain insight about commuting times, what stores and restaurants people visit, and based on their location and travel patterns they can determine when mobile marketing is better suited than traditional marketing.  Apps with GPS access are becoming increasingly popular because consumers are garnering benefits from the apps.

Google recently started automatically compiling photo scrapbooks called Google+ Stories when they identify that consumers have recently been traveling. Earlier this year Google compiled photos of our family’s road trip through Texas and Louisiana, even highlighting our route on the map. I was impressed with Google’s “Story” album and I didn’t even have to compile it myself. Google Now, another Google feature provides consumers with valuable information like directions to your off-site meeting, or events nearby that might appeal to you.

Social media provides insight beyond belief. These sites and apps can garner insight about where people grew up, went to school, live, work and play. They even know what they like, who their friends are, what types of music they listen to, and which movies they watch too. It’s pretty scary if you think about it, but consumers are eager to share this type of information if it benefits them. After all, who doesn’t appreciate the ease of connecting with old friends, saving money with discount offers nearby, or getting alerts of an upcoming traffic jam?

Unfortunately, even though there are so many things we know about consumers these days, many companies simply don’t take the time to ask their customers what it is that they REALLY want. Their opinions simply can’t be determined by metrics alone. Sure, we may use tools like Google Analytics or Omniture to understand how customers came to our site and how they interacted while there, but what is it that the customer REALLY thinks about their experience. What they were REALLY looking for? What would they like to be different?

My experience has led me to believe that customers absolutely love to share their wants and desires, but most companies simply don’t ask, don’t care, or don’t REALLY pay attention to what their customers are saying. As a consumer myself, I don’t mind giving my opinion if I know my voice will be heard, and if my time is valued. Haven’t we all started a survey that doesn’t provide a clear indication of how long it will take, eventually quitting 10 minutes into it because we simply don’t have any extra time to waste? I despise surveys like that, angry that my time apparently wasn’t deemed valuable. If I’m going to take a long survey like that, I at least want to know how long it is expected to take, and I’d also expect some sort of compensation for my time.

Google Opinion Rewards seems to get it with their simple app based surveys. They reward customers with small Google Play credits, and limit their surveys to only a few very simple questions. I was so intrigued with the simplicity, I decided to create my own survey. I must say, I was impressed. I developed the survey in about five minutes (yes, only 5 minutes!). My question was “Which social sites do you use to stay connected with businesses?”. Short and to the point. My survey was approved and already in progress about an hour later. I was able to review metrics in real-time while the survey was in progress, and 2 days later it was fully complete.

Although this was only a small survey of 750 people, it still provided good insight for the minimal cost of only $75 (free after my introductory coupon). I learned a few interesting facts with this simple and inexpensive survey. Results showed Facebook ranked the highest at 25.2% (no surprise there), followed by LinkedIn and Google+ tied at 11.3%, Instagram at 5.2% and Pinterest with 4.4%. The balance chose none of the above.

Was I surprised at the findings? Sort of. I wasn’t expecting to see Google+ rank as high as it did. It actually ranked the highest with those surveyed over the age of 65. Other findings were more in alignment with my expectations, such as Instagram ranking far higher with younger customers and Pinterest being more popular with females.

The point here is that simply asking your customers for their input will generally yield an honest response. Whether you engage your customers using surveys, forums, social media, or other means, just ask them for their opinion.  You’ll be surprised with just how much your customers will want to share with you if you simply ask them in a manner that respects their time, is not complicated and shows a sincere interest to receive their input. At that point, it’s in your hands to do something with that information, ensuring customers feel as if their voices were heard and you actually cared enough to do something about it.

Whether you plan to develop new features for your website, launch a new brand logo, or rollout a new product line, I highly suggest you seek input from your customers first. After all, isn’t it all about the customer anyway?

Have questions, comments or would like to receive a free copy of the survey results? Email me at steve@allindustryconsulting.com.